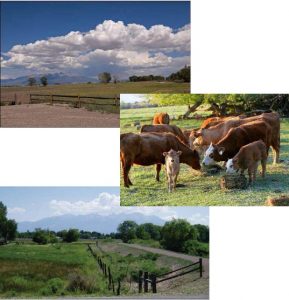 This project was several months in the making.  The research of the history of the Ranch and the review of various Ranch land management plans began in late June, 2018.  Once the research was substantially complete staff prepared a site analysis of the Ranch.  The site analysis included wetlands, wildlife habitat, existing recreational activities, soils types and ranch facilities including pastures, irrigation distiches and the Maddux dairy.  The site analysis was used to prepare an Opportunities and Constraints map.  The map, (found in Appendix A) was used to determine areas of the Ranch that should be protected and other areas that could support a wider range of low impact uses and areas that could be used for an economic development activity.

This analysis was presented to the public in two separate community meetings held on August 6 and 7, 2018.  The public in attendance were asked to use the land use analysis maps as the basis for selecting areas of the Ranch that should be conserved, maintain existing ranching operations or available for alternative uses including economic development.  The people were asked to break up into small groups and use markers to draw on maps of the Ranch and write notes and labels in the margins describing their thoughts.

The second draft incorporated the feedback received from the community, staff and Mr. Law and was presented to the Recreation Advisory Board (Rec Board) on October 9, 2018.  The Rec Board suggested a few changes to the text regarding conservation easement and reservations of land for community farming efforts. The Rec Board approved the Alamosa City Ranch Master Plan with the changes suggested and recommended the plan be forwarded to the City Council for adoption.

On October 17, 2018 the Council held a worksession to discuss the Ranch Plan. The Council requested some edits to the Conservation Easement section and also requested that potential recreation projects funded through the sale of a conservation easement be ranked based on need.  Those edits are incorporated in the adopted plan presented here.